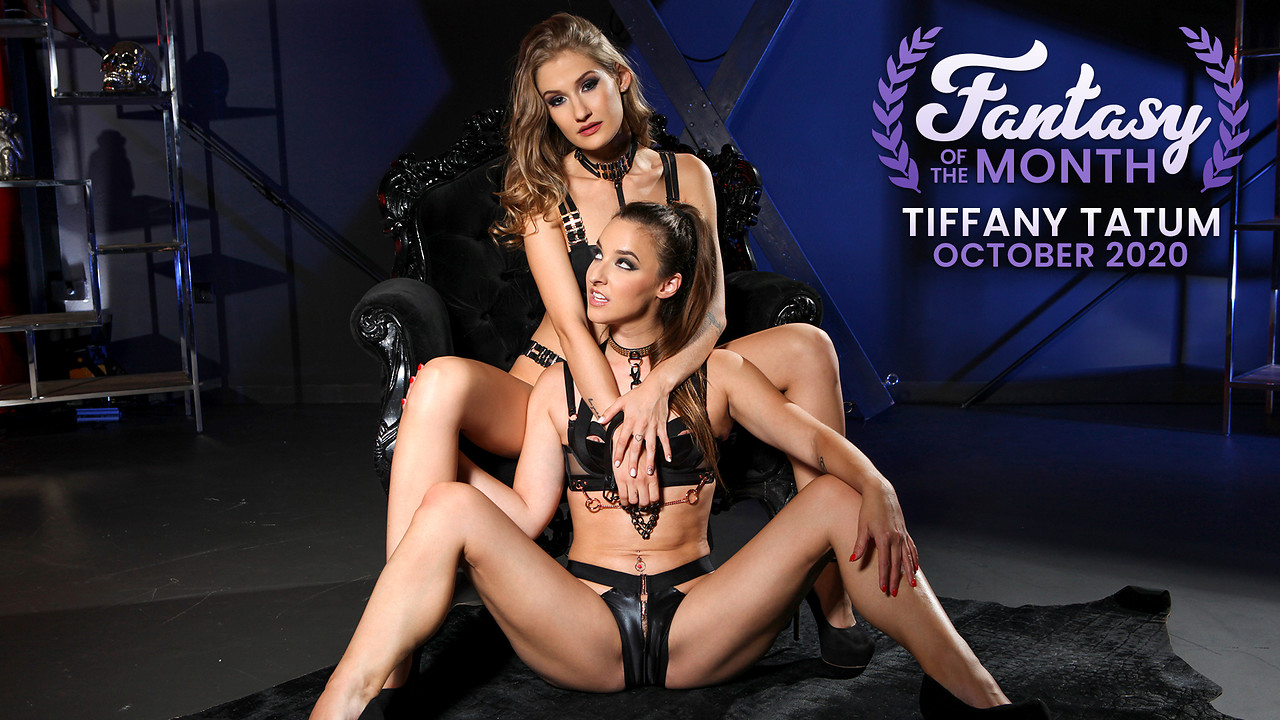 October’s featured Fantasy of the Month focuses on Tiffany Tatum, a longtime favorite on Nubile Films. After we’ve learned a little bit about Tiffany, we get to enjoy watching her open up about her secret desires. This stunner wants to be the mistress of a lady slave and to have a man watching and waiting to show her slave how to fuck. Her interviewer, Amira Adara, tells Tiffany they can make that happen. She’s super flattered when Tiffany picks Raul Costa to be the man in her fantasy… And Amira to be the woman!

When it’s time for Tiffany’s fantasy to come true, she leads Amira onto the set on a leash. Both girls are dressed to the nines in sexy black lingerie that highlights every curve. After settling in the chair with Amira, Tiffany checks to make sure Raul is watching. Amira is obedient to Tiffany’s every need, rubbing Tiffany’s twat and then licking her way down Tiffany’s body.

Settling between Tiffany’s thighs, Amira eventually moves her mistress’s thong aside to deliver a proper pussy licking. Her nose buried in Tiffany’s muff, Amira works her tongue overtime on Tiffany’s clit. As her pleasure deepens, Tiffany winds her hand in Amira’s hair and throws her head back in pure carnal bliss. She keeps it up until Tiffany grabs her leash and then kisses her own musk from Amira’s lips.

Leading Amira over to the side, she makes it clear that her slave should sit and stay. Then she grabs Raul by the tie and leads him back to the chaise. Obedient to his lover’s whim, Raul picks up feasting on Tiffany’s pussy right where Amira left off. He takes his time, indulging Tiffany with slow sweeps of his tongue and plenty of clit play.

Unhooking Amira’s chain, Tiffany leads her back to the chaise. On her hands and knees, Tiffany captures Amira’s lips in a deep kiss as Raul accepts the blatant invitation to take her from behind. As Tiffany lets Raul dominate her from behind, she guides Amira to lay herself down beneath her. That way, she can capture Amira’s lips in deep kisses while she plays with Amira’s clitoris and tits.

Tiffany remains in the center of attention as Raul gets her on her back with her knees spread to her shoulders. As Raul eats Tiffany out and finger bangs her greedy snatch, Amira focuses on Tiffany’s nipples. With both of her lovers’ dedicated attention, Tiffany is soon wet and ready for another go with Raul’s hardon. Scooting forward, she again draws her legs back so that she is completely open to his ministrations.

Disengaging, Amira gets up and returns with a vibrating toy. She curls up behind Tiffany so that Tiffany can lay her head in Amira’s lap. Turning the vibrator on, Amira presses it to Tiffany’s clit to keep her party rolling. When the group switches things up again, it is to have Raul lay down so Tiffany can ride his cock. Ever the attentive slave, Amira keeps the attention on Tiffany’s clit as Raul fucks her, using both her hands and mouth for Tiffany’s pleasure. When Tiffany turns around to ride in reverse cowgirl, Amira tickles her bottom with her fingers and tongue.

Get All New Posts to your email